I slept well and felt way better, not good yet but way better. No need for more resting time. I was certain that this was another heat stroke or an early warning. No need to visit a hospital, self recovery is a great thing, be able to listen to your body and accept a rest are good and very important abilities, I say. Only some miles after I left my resting place and I could cross the border into Macedonia. The area around here had been one of the refugee route across the balkan. Already during my planning I had a strange feeling, as I tried to find information about the small old or meanwhile ‘green’ border crossing. The refugee situation had a disastrous face in some youtube clips that I was looking for to identify the condition of the road and the border crossing, as this one was not listed as an international border crossing point. I decided to head down onto the highway for the last miles, as I did in Bulgaria last year. It was easy to get on the motorway and after the border it was also easy to get off again.
Directly behind the border, on the other side of the road I met a proud and big wolf. I stopped and only looked at him, he did not move. I just looked at me, it felt as if he was welcoming me. The hair were very light brown, almost white. Behind him the sun was getting up, an amazing welcome to Macedonia.
Komanova was the first Macedonian city that I stopped for some breakfast, I had appetite, a good sign from inside. Tomatoes, cucumber, a piece of sheep cheese, salami and some slices of bread. As a drink some yoghurt and this was it. I brought all my stuff into a small green and sunny park, that strongly reminded me of China. Morning excercises of elder people. Perfect place to start the day. After having eaten the first bits, things felt good and I continued. I was only careful with cheese and bread. This was another hot day, I was certain not to get into a rush which I would have loved to do under ‘normal’ circumstances. Go slow but go. Have rests with ice creams and chilled drinks, try to refuel somehow. These had been my simple rules to make it to the finish line.
It got hot again and it did not take long until my next stop on a traditional chaotic and crowded market that was funny to watch. Here I met Paul from Sweden only for a short chat. He went for food and I went on. Some hours later we met again. I was already resting for a while and obviously he was also hunting for some cold drinks, he did not recognize me at all, only when he left the shop, he realized that he parked his bike leaning on mine. He joined me in my shadow place and we talked about the world. He went on, I stayed. It was so so so hot, you might know these temperatures from sometimes. But for sure not from doing sports, and not days several days in a row. This was a hard time for me as I am always struggling when higher temperatures come up. Just getting ahead, changing the boiling hot water whenever possible. The last high climb of Macedonia showed up, almost 1000m of elevation. It got dark during that climb and I preferred to rest here und ride through the night then. I asked the guy at the petrol station for permission to sleep on his lawn, no problem for him, easy for me. Jeff woke me up, 30mins early of my wake up alarm. What a nice surprise. We talked for a while and shared some food. Then we decided to head on through the night. Together. Side by side. 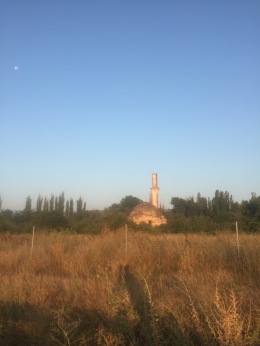 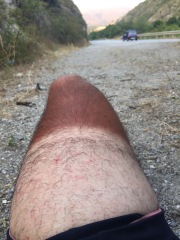