Two weeks ago, I was talking to Patrick whom I met first during the Transcontinental Race back in 2016 down in Greece. Often, I had the plan to visit him in Paris, for a short breakfast or at least a coffee. Said that one time too often, I dropped him a line, asking him how about cycling down to the Pyrenées to pay Camille Mc Millan a visit. He was in but Camille was out for a job, so we talked about headed further west from Paris. But finally meet in Paris for a coffee.

Spontaneous again, I packed my stuff and left home on a Saturday night towards west. After I found myself in the Palatine hills, I decided to have a rest, even though I wanted to give myself a quick ride to Paris. In my mind I only wanted to stop for two hours, somewhere on a bench in the garden of an elementary school. Knowing myself, I got off five hours after I send mysel to sleep. It does not really matter. Patrick said, that he plans to leave around six o’clock in the morning on Monday. So I still had enough of time. For this ride, I have to give great compliments to komoot. The last time that I rode into this direction for a longer distance was when I cycled to the starting point of Paris-Roubaix back in March or April of 2017. At that time I did really hate my ride, ups and downs only. In additon it was freaking cold, I did not wear winter gloves, I remember that I had to defreeze in a bakery in Kaiserslautern as I could not feel my fingers anymore. This time it was a completely different story. I loved the ride, wonderful roads, almost no traffic and the sun was out, almost the entire day. I could get fresh water in each and every single village in France, as every village had a church and also a cemetery. This was really easy, even as it was getting surprisingly warm during this Sunday. I had some early breakfast, a late lunch sandwich and a vip kebab in Villeneuve in Champagne. A kebab with a glass of champagne. Then I climbed the last little hills in Champagne and headed further west. A little more than 24 hours after leaving Heidelberg, I reached the suburbs of Paris and it took me 2-3 hours to get into the heart of Paris. I rode around the empty roads, getting to the Eiffeltower, Invalides, Arc de Triomphe and at the end I climb up to Sacre Coeur, as this was close to Patrick’s place. I was up at the top of Montmartre around 0500, so I send him a message, not to wake him up too early.

Indeed, he was just waking up, he invited me over for having a Spaghetti breakfast with coffee and orange pressé. Perfect arrival in Paris. Thank you for that.

We shortly discussed his cycling plans, as he planned to ride west, to Point du Raz and then back along the northern coast line of Brittany. This was definitely too long for me, as I planned to be back home around Wednesday noon. Brittany is loved for being away from everything, so if you want to get out of there, it may give you a challenge. I found a train connection from Brest, this one would only have worked out when there was no strike of sncf, the national train transportation company. So this limited my options to a Flixbus from Paris.

We left Montmartre together after I put Patrick route onto my garmin. I changed my route out of Paris to his, which I regretted very very soon. Patrick realized his garmin was on strike as well, so he returned home to fix it. I rode on, on the autobahn out of Paris, in the early communting traffic, how lovely was that. French car drivers inside the cities have a much different attitude than somewhere else. I did not feel comfortable at all. Bike lanes on fast roads often are not serviced, full of small stones, dust and broken glass. After a little more than an hour on that road, I decided to detour. I saw a little bridge crossing my road, I only had to get on it, somehow. Then I found a good way into the fields. Not free of traffic but a lot less of it.

Obviously this gave some stress to me, combined with a sleepless night I was coming from, I decided to ride a little slower and have a little rest in the shadow. Next to chateau de Thoiry I had a rest. The main reason was, that I wanted to adjust my rear brake. As I am still running a converter from mechanic to hydraulic brakes, I was guessing there was some issue with it, again. This piece of work was the weakest part of all my setup, since the beginning, although it also was a great flexibility, as I can fully disconnect my huge handle bar from the rest of the bike, which is very helpful for getting the bike into a bikebox, somewhere far away. I still wanted to find proper couplings for the hydraulic lines, before changing to hydraulic levers. Hm, not sure how I will decide about this but definitely there was an issue with the Doppelmoppel, again. the actual key piece from pressing the piston by pushing the mechanic cable  broke apart. After two years of use. How wonderful, as it was clear that I will not ride on with a damage like this. End of my ride, back to Paris. First I rescheduled my trip back to Germany, then I figured out where to find a train station around where I was sitting now. I had some more rest, as  had loads of time from now until my definite departure from Paris in the night. I found a station only about 10kms from where I was at that moment. I chose to ride slowly and I made it there, safely. Got a ticket into Paris and had a warm and sunny afternoon and evening along the river Seine. Let us see where the next trip will lead us to! 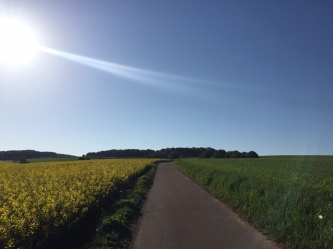 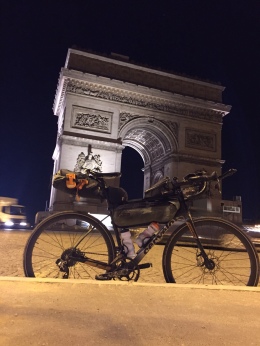 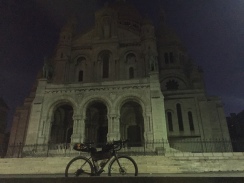 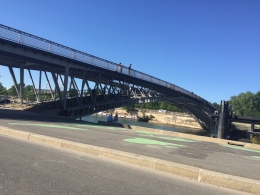