After getting up around 0530 or 0600 I continued through a beautiful morning, charged some discusting coffee and some sandwiches in a bakery and moved on towards the alps. Climbing the Fernpass towards Innsbruck was the first tricky situation on the road after suffering on Belgian and German inconvenient cycle path solutions that are badly maintained and/ or end just somewhere.
Climbing up towards Austria, I quickly understood why we still need to produce private cars with 500 and more horse power. Trailers with yachts and camper trailers need to be pulled over the alps and not through the tunnels that we made to easily get on the other side. Well then, the problem with these extensions is that the holiday trailer drivers mostly do not have any clue how wide and how long their trailers are. Overtaking so so narrowly and dangerously rarely happened to me by car anywhere else. Truck driver know their machines pretty well mostly they wait if there was no room for them, these silly people that quickly want to get to their holiday destination did not realize when they were doing here. This sometimes forces the ride to ride more in the middle of the road than necessary. One thing causes another one … the descend into Austria was beautiful and the climb towards Brenner is not that bad as well. On Brennerpass I met with John (ROSH | #getroshed), he was participating “NorthCape4000”, having some Italian sandwiches and the first proper espresso. It was nice meeting with him and two of his fellows. Heading on towards Bolzano and Trento to climb Monte Grappa, Check Point 02 in the morning. I arrived in Bolzano around 2200 and was looking for some simple and easy food. It took a good while until I came back to the road where I entered the city center and there was a place was some pizza al taglio, slices of pizza. I had some and other rider showed up and we had a little chat. When I drove off I soon met Urs again on the track and we drove up to Trento together, having nice talks on the amazing cycle path along the river Adige. During day light this ride is breath taking. We reached Trento in the early morning and Urs wanted to have a short rest. Only minutes after he turned away for sleeping my route turned left, directly into the hill/ mountain. Warning, smells like komoot shortcut. And it definitely was, not serpentines, not just straight up. At three o’clock in the morning my heart rate was forced up to its maximum within seconds. I was so unprepared for that climb that I was very exhausting within seconds. I needed breaks during this climb, put myself between wall and road lightning pole, seated on the bike and slept 10mins with a rested head on the tt-handlebar. Only to kill that climb and not to walk it up. I did this twice and finally I met a bigger road that was still steep but not that steep. Then I found a bench on the side of the road in the middle of a village. What shells, good enough for a rest. 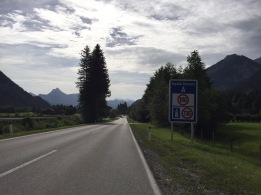 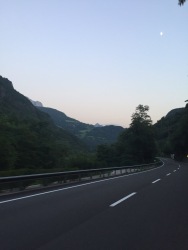 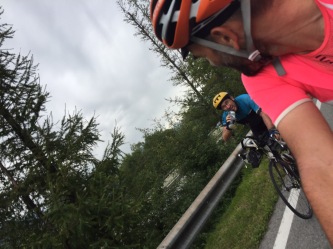 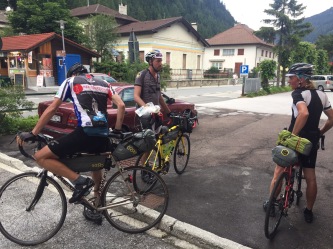