I woke up surrounded by the same dogs as I fell asleep. Very relaxed situation in this bubble, next to the bar that was already open and the traffic was heavy. I washed my face, brushed my teeth and got back on the bike. This day was just another hot and dusty day, I could tell at 0600 in the morning. Straight along this road, until I hit the river danube, Serbia and Bulgaria. I needed to stop at a petrol station, as I had no Romanian Lei. And I needed to charge my phone. It did not work from the Dynamo and also not from the powerbank, only from a proper socket, please do not ask why. I brought three different iPhone charging cables and each one was only good for a specific purpose. I have no clue why. Some coffees, some wafers and some waiting time. Crossing the borders was always a nice things as you could pass all cars. Cyclists are passengers, so we are allowed to walk up to the front. In Bulgaria I stopped again to get some yoghurt, which I have never seen at a petrol station in Romania. During the last days it was almost impossible it was almost impossible to eat during the day time, due to the torturing temperatures. A straight boring road to cross Bulgaria one guy at the petrol station offered me to clean my bike for free. In his eyes it must have looked terrible. I declined, had a chat, some chilled drinks and continued my route. Around noon, I reached the border to Serbia. Directly after the border i saw a rider upfront who was riding slowly and he was very much down. He shouted at everything, himself, his bike, his life, the road and the race. It was time to present myself and try to get him into a better mood. When I showed up he was happily shouting out my name and I could not remember who this guy was. At this moment he just looked like someone who really suffered during the last almost two weeks. We rode a little and then we stopped and talked for a while. He was totally upset with his bicycle and the selection of his components. He complained about the roads and everything again. Finally we figured out that it was not a long way to go to the next bike shop, that already saved the life of other TCR riders.
This part of Serbia was appearing sad to me. The cities or villages that I crossed had been almost dead, no life at all. I did some miles, ate some ice creams and had some sweet sugar drinks. In the late afternoon there started a long and hot climb, komoot planning recommended a shortcut, I decided not to take it but need some more time. Surely this was a good decision, so the climbing was comfortable enough. And the good thing of a climb is that at the end there is going to be a descend. Same here, there was a smooth descend into a nice village. I had the idea to find a good place for dinner which showed up directly behind the welcome sign of the village. During the dinner I put all my electronic devices in the restaurant for charging and rode away to find rest for two hours on a calm playground. I overslept and raced back to to restaurant, it was still open. Otherwise I had to wait until the next day. Right now I did not have any big roads to get ahead, no big traffic. I did not make it for long. I stopped at a petrol station and found some place for resting just in the rear of it. 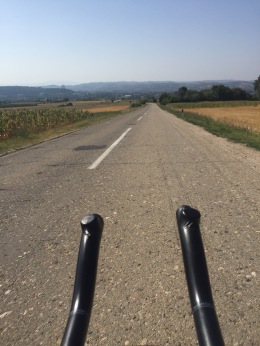 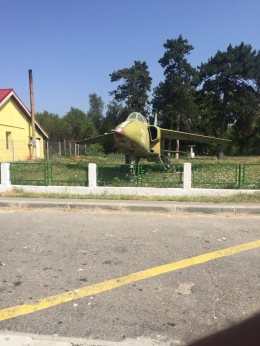 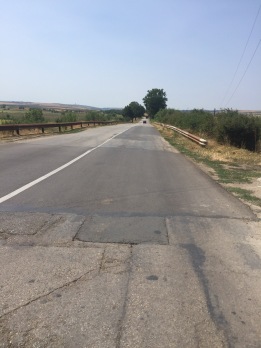 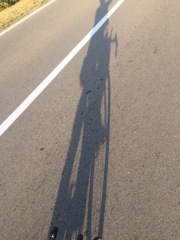 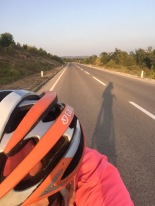 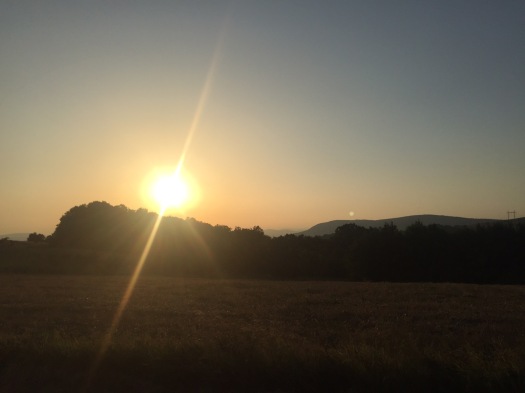